Prague, historically the capital of Bohemia and described as a political, cultural, and economic center of central Europe, lies on both sides of the Vltava River and encompasses approximately 2 million people. Prague has been the capital of the Holy Roman Empire and seat of two of its Emperors. https://en.wikipedia.org/wiki/Prague

An early influence for the Protestant Reformation was John Wycliff, 1331-1384, who held that the individual may interpret the Bible, individual holiness is more important than official office, the exorbitant luxury and pomp of the church ceremonies was excessive, and transubstantiation was not possible. He translated the Bible into English in 1370. https://en.wikipedia.org/wiki/John_Wycliffe

Jan Hus, is associated with the Bohemian Reformation, a movement predating the Protestant Reformation by 100 years, which moved for “communion under both kinds”, preaching in the vernacular, teaching of an immediate relationship between God and man, and expressed a distaste for the wealth and power of the church. https://en.wikipedia.org/wiki/Jan_Hus  Hus took many of his ideas from the writings of Wycliff. The Bohemian Reformation, however, did not diffuse throughout Europe and gradually lost its distinctiveness https://en.wikipedia.org/wiki/Bohemian_Reformation

This is our second trip to Prague, You might wish to visit the previous blog, found here: barrett915.me . This time I wanted to obtain pictures, including night shots, that I did not have from two years ago. Accordingly I was blessed to have the good council of Radka Vocetkova, an accomplished photographer and professional guide. The night shots this time would not have been possible without her good eye and knowledge of the city. 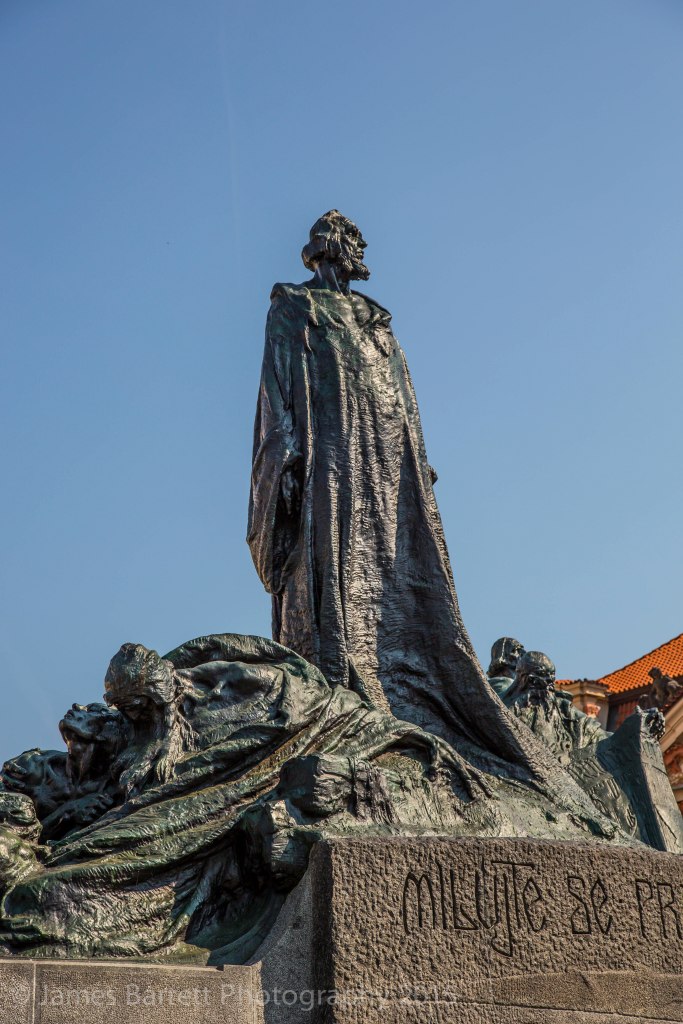 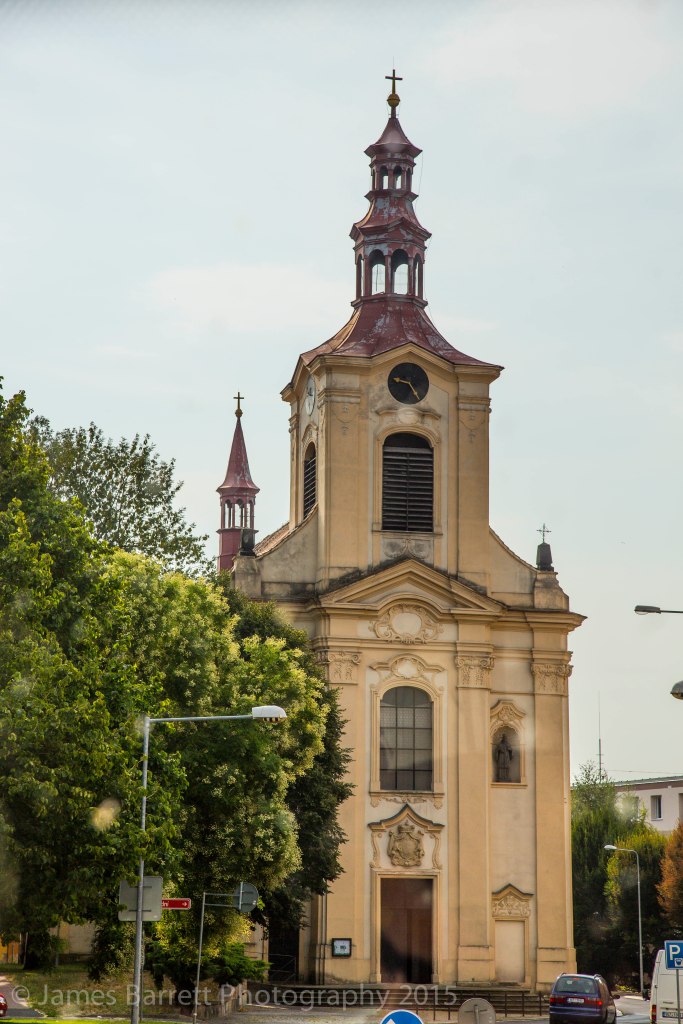 The Church where Hus preached. 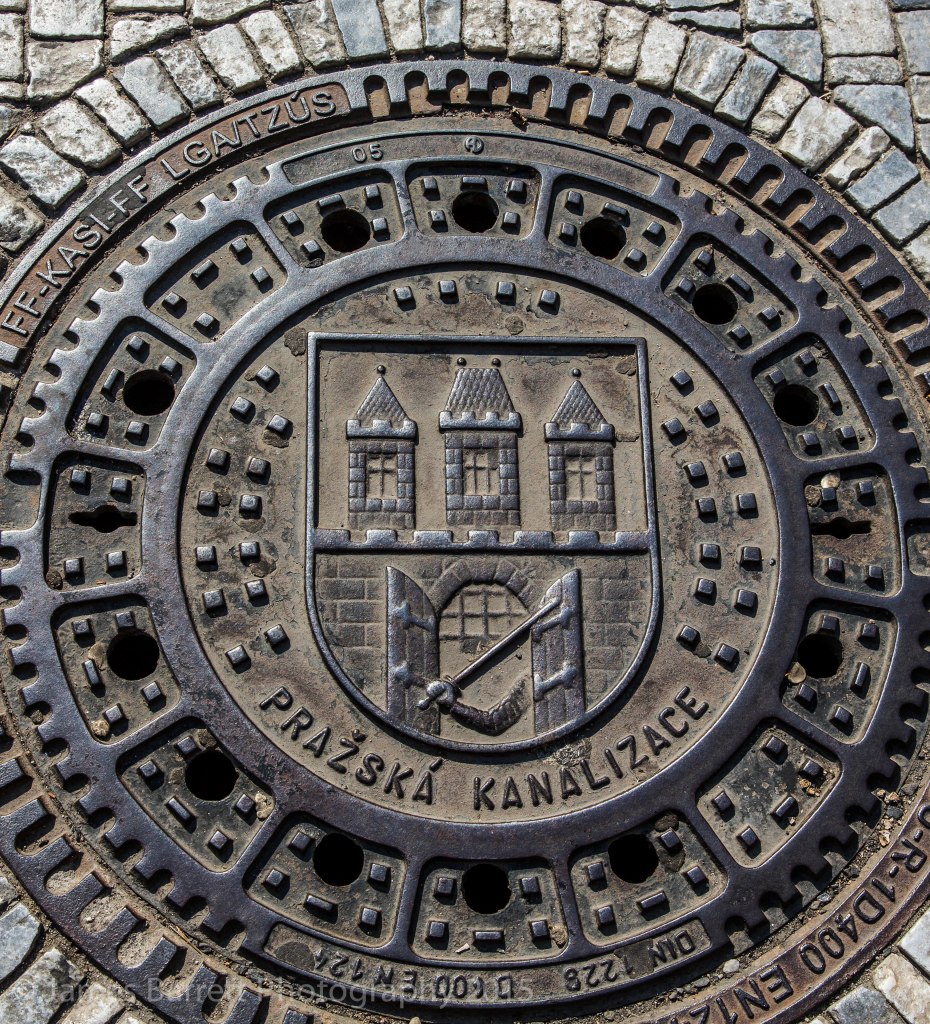 The Municipal House https://en.wikipedia.org/wiki/Municipal_House is built on the site of the former Royal court palace, occupied in the 14th and 15th centuries by the King of Bohemia. It is a venue for civic offices, concerts, and houses restaurants and cafes. This site has a few good pictures of the inside from which we were forbidden to enter. This building is next to the powder tower.

The powder tower. You can find out more about this here: barrett915.me . 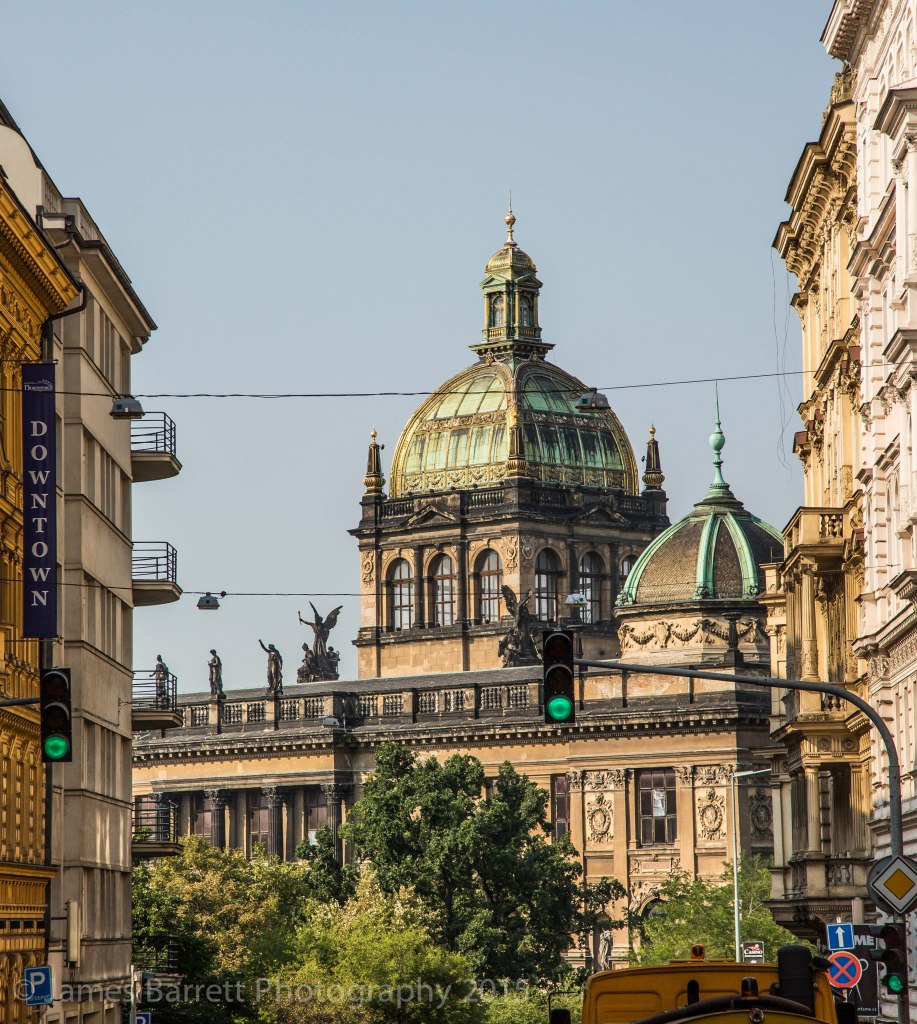 The National Museum, closed while under renovation for the next several years.

The Church of Our Lady of Tyn taken from the Old Town Hall. https://en.wikipedia.org/wiki/Church_of_Our_Lady_before_Týn We could not take pictures inside. 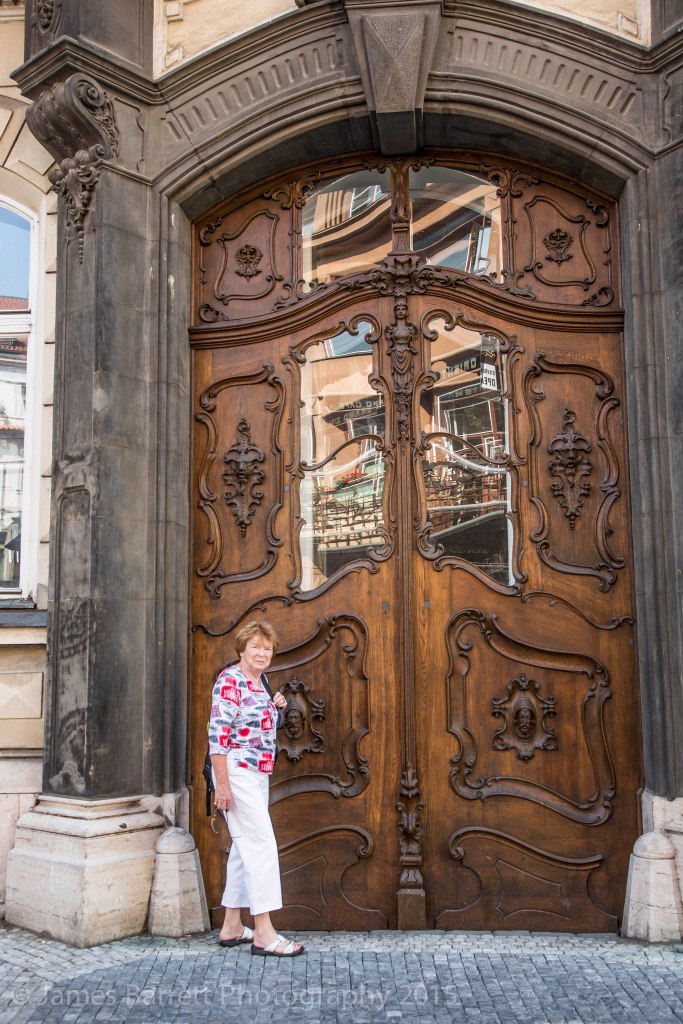 Entrance to the Old Town Hall, expanded over time to include several attached buildings. https://en.wikipedia.org/wiki/Old_Town_Hall_(Prague)

One afternoon, we were exploring side streets, and happened upon St. James’ Basilica. This afternoon was so hot that retreat into a cooler space was inviting. 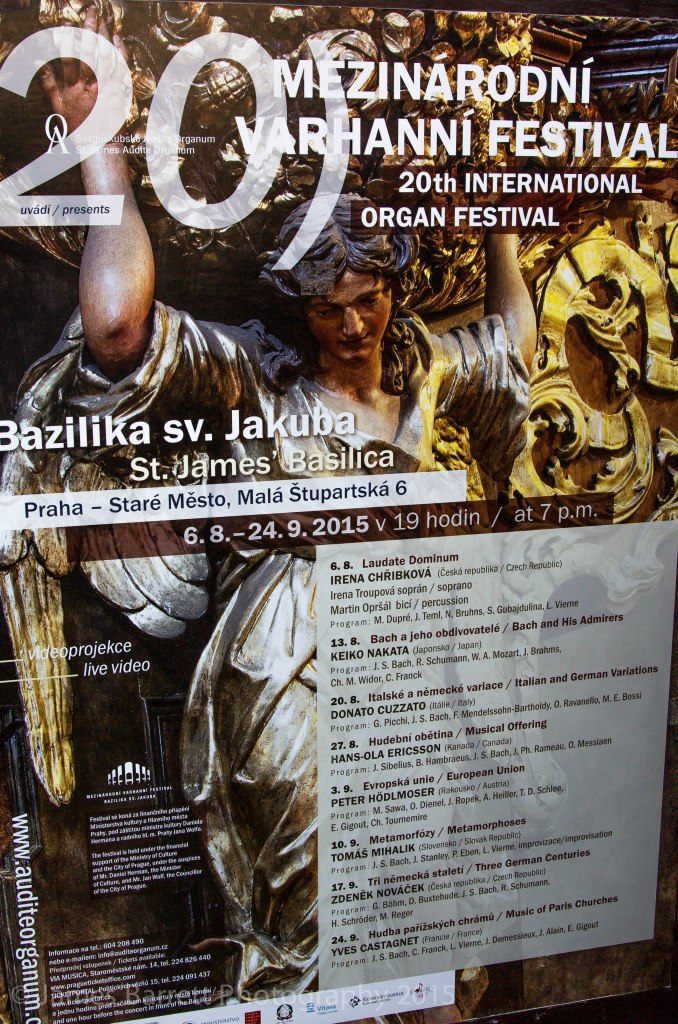 This church did not prohibit pictures so I came away with the following.

I have never seen  Christ portrayed in this manner. Ecce Homo: Behold the man, John 19.5

What follows are pictures of shots obtained with Radka’s guidance for best locations.

A shot including the Charles Bridge at sunset.

We came upon this tribute to the NYC firefighters who lost their lives on 09/11/2001. I’ve increased the exposure so that we could read the inscription. 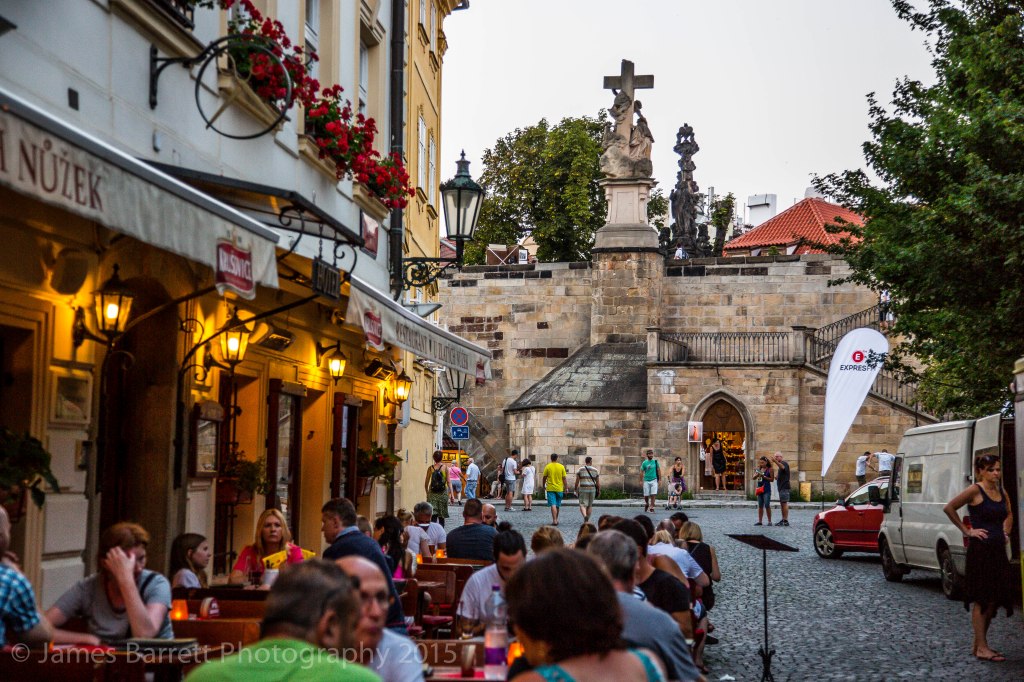 At the base of the Charles Bridge across from Old Town. Europeans can be found dining late into the evening. 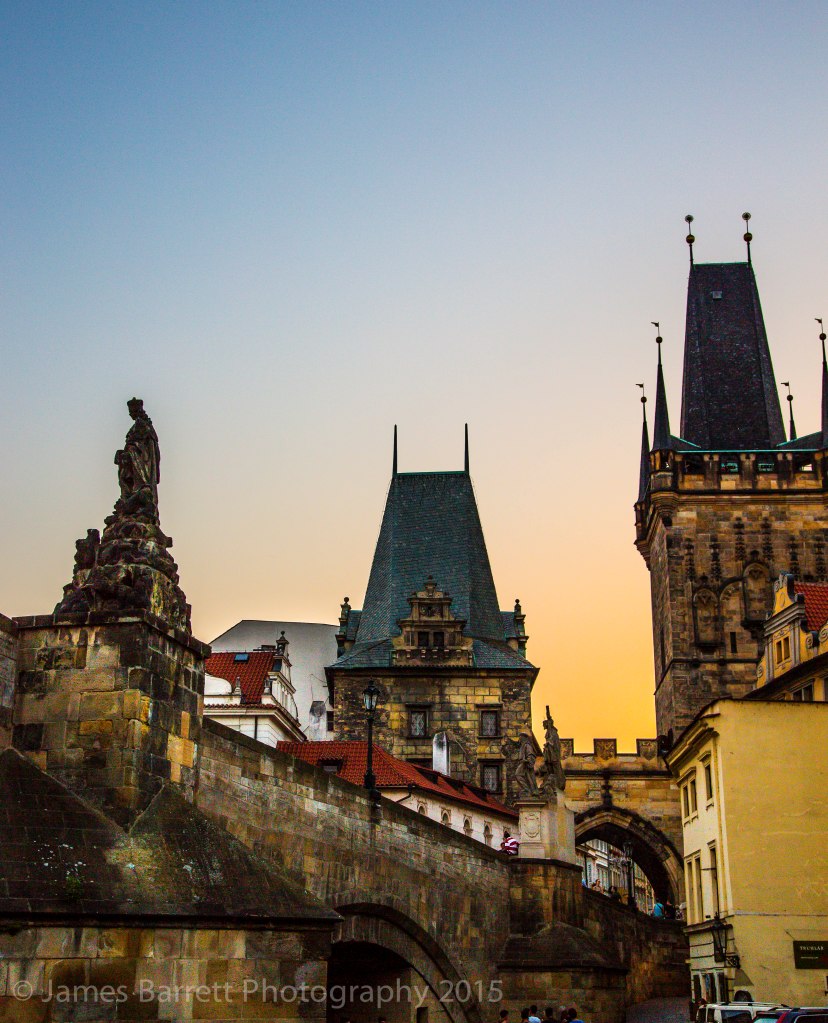 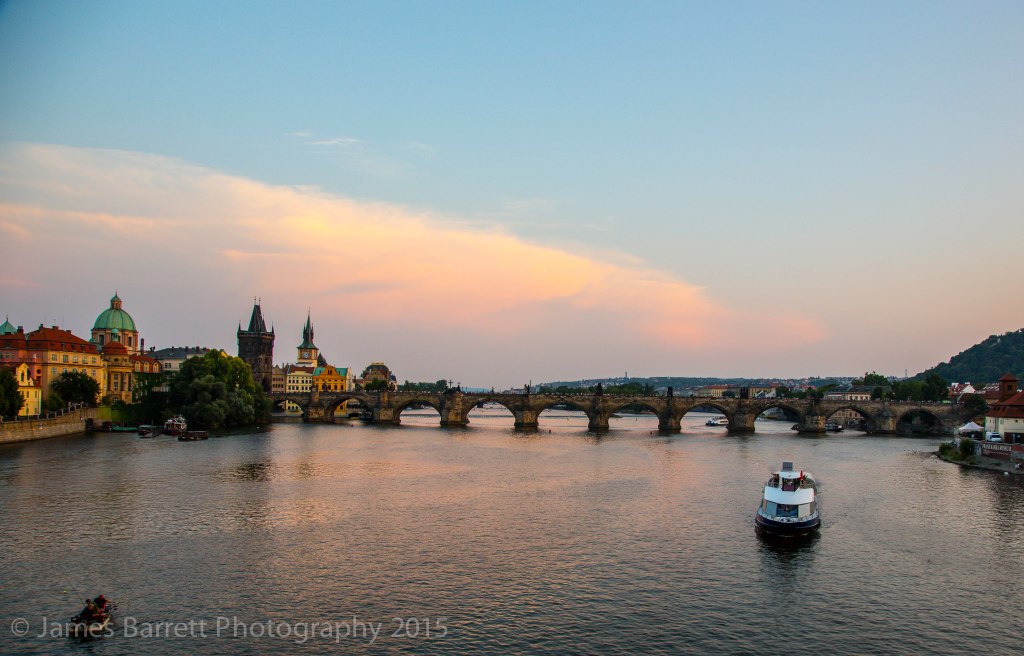 I agreed with Radka that this is an interesting image. 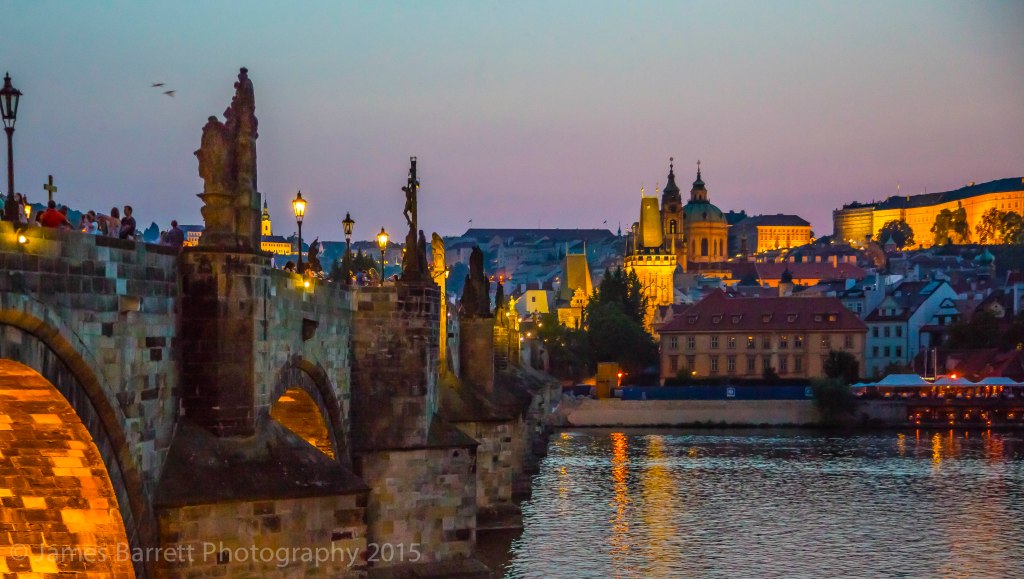 St. John of Napomuk https://en.wikipedia.org/wiki/John_of_Nepomuk  is a national saint of Bohemia and martyr who was drowned in the Vltava River in the 14th century on the orders of King Wenceslas I.

A view of Castle Hill, the Palace, and St. Vitus Church. 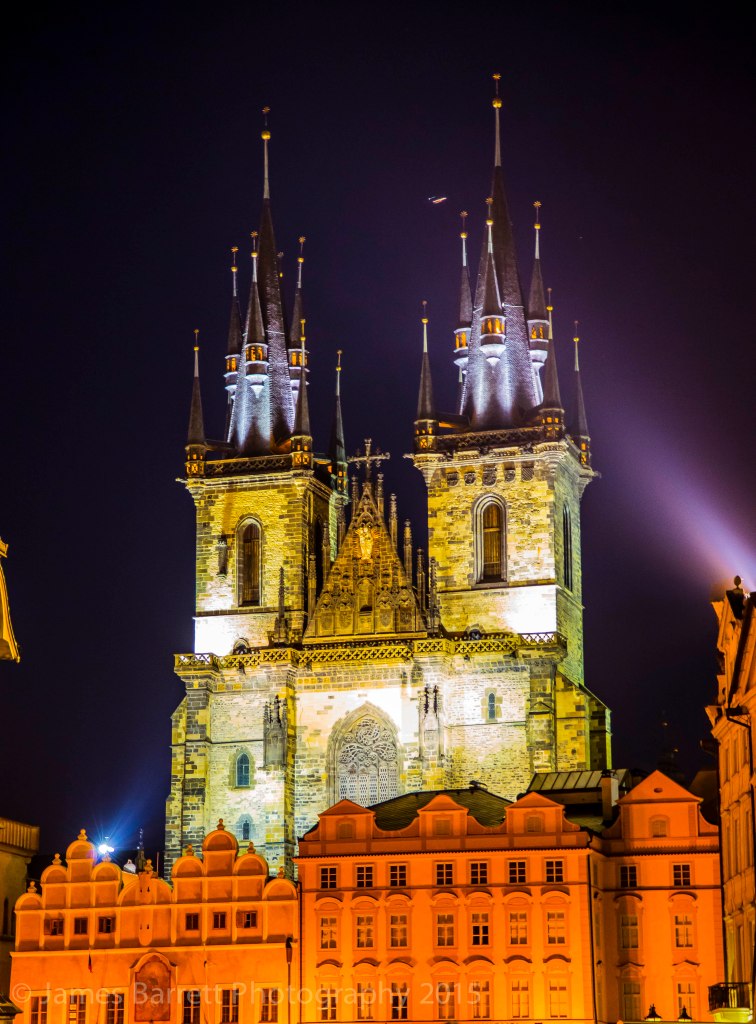 The Church of Our Lady of Tyn later in the evening. 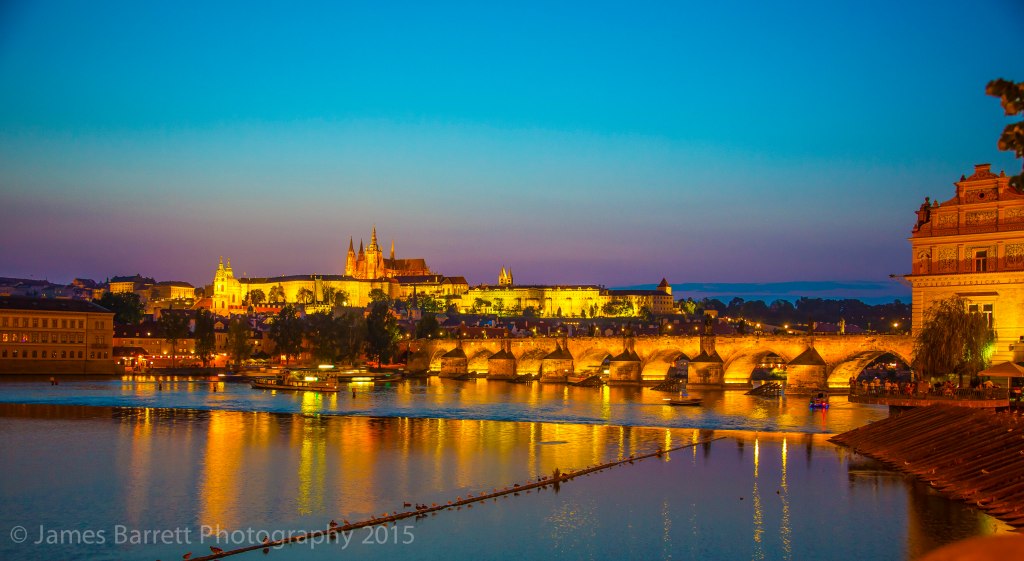 We finished the day with this iconic shot of the Charles Bridge and Castle Hill. Four hours of Radka’s expertise culminated in this keeper shot. Thank you, Radka!

One thought on “Prague”